Veteran and Southern Company military recruiter Jamal Jessie says he views the U.S. Military as the best military in the world, so when he transitioned from a 20-year career with the U.S. Navy to civilian life in 2015, it only made sense to work for one of the best companies for veterans.

“As a recruiter for the Navy, my scope of responsibility was vast. The leadership opportunities and the opportunity to build relationships set me up for success not only in the Navy but also now at Southern Company,” Jamal says. “I connected with and built relationships with people within the Navy and in the community, and that’s similar to what I do now – meeting with people on bases to attract top talent for Southern Company.”

May is National Military Appreciation Month, and citizens nationwide are encouraged to celebrate those who have served our country or are serving our country. Because the military and our industry’s cultures are similar – exemplifying dedication, commitment to safety, teamwork and excellence – we actively recruit military personnel who are transitioning out of service.  In fact, veterans account for 10 percent of our company’s 32,000 employees.

Without knowing it, Jamal had been preparing for his recruiting position for years. He joined the Navy after graduating from high school. Jamal spent his first 10 years in communications and was deployed at-sea four times. He then went on to serve as a full-time recruiter for 10 more years until he retired in 2014.

“Veterans play a huge part in our safety and in our lives, every day,” Jamal says, “and Southern Company gives us the opportunity to do the same thing here.”

When it comes to recruiting, Jamal says, “We are looking for the best of the best.” He partners with our operating companies and business units, developing strategies to recruit talent for specific positions. He travels to military bases where he fosters relationships and talks to military personnel who are transitioning from military to civilian working life to find that talent.

“We speak the same language, we have trust,” he says. “Southern Company values the veteran. We understand the teamwork and the training that veterans bring to our organization. The skills match is a huge advantage for both veterans and Southern Company.” 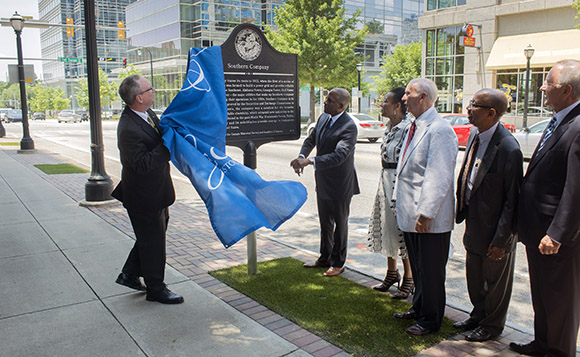