The company, along with Mitsubishi Heavy Industries (MHI), won the gold award for corporate social responsibility, as well as an additional R&D 100 Award in the process/prototyping category, for an innovative carbon capture technology, the KM-CDRTM process. The process was selected as a finalist in a third category: mechanical devices/materials. 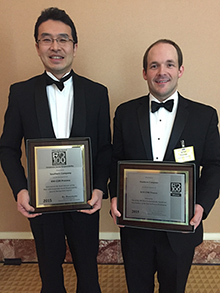 Carbon capture and storage (CCS) is a technology that can recover up to 90 percent of the carbon dioxide (CO2) produced from the combustion of fossil fuels in electric generation facilities. Prior to this work, the KM-CDR process - developed through the collaborative efforts of Southern Company and MHI - had not been demonstrated at a large scale for CO2 from coal-fired generating units. Developing this technology at a 25-MW scale was the first and largest sequential, solvent-based capture and sequestration demonstration on a pulverized-coal power plant in the world.

"Our research and development efforts are focused on finding solutions that advance technological, environmental and economic business cases," said Steve Wilson, Southern Company research and development general manager. "We needed to fully understand the KM-CDR process at an integrated commercial scale as part of our ongoing efforts to improve the viability of CCS. This award recognizes the commitment of our project partners, the leadership of the Plant Barry host site management and staff, and the dedication of the entire project team."

For more than 50 years, R&D Magazine has presented the R&D 100 Awards recognizing the top 100 most technologically significant products of the year. Finalists were selected by an independent panel of more than 70 judges and represent many of industry's leading organizations and national laboratories.

About the carbon capture project

Located at Alabama Power's Plant Barry, Southern Company's 25-MW carbon capture and storage project is the largest demonstration of carbon capture on a pulverized-coal power plant in the U.S. The project represents a worldwide partnership led by Southern Company that includes the U.S. Department of Energy, Mitsubishi Heavy Industries, the Electric Power Research Institute, Denbury Resources, Southern States Energy Board, rail companies and a host of international utilities. As of Nov. 1, 2015, the project has captured more than 240,000 metric tons of CO2, and has transported and injected more than 115,000 metric tons of CO2.

Stay up to date with our latest projects and insights.

Find news for the media about Southern Company and its subsidiaries.