Since 2004, Southern Company has catalyzed public and private conservation actions to reclaim the extraordinarily diverse cultural, ecological and socio-economic values of the longleaf pine ecosystem and continues to play a leadership role in restoration efforts. 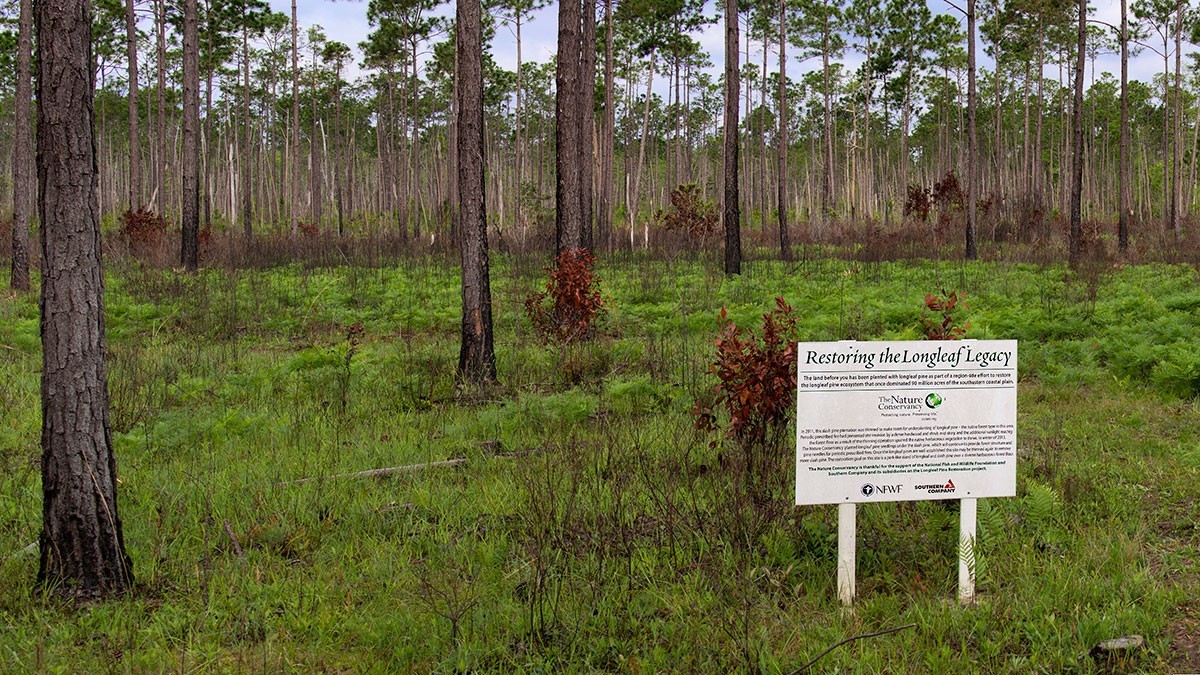 The beauty and biodiversity of America’s longleaf pine forests is a well-kept secret, even in their native Southern range. Once 90 million acres strong, these magnificent pines towering over diverse grasslands dominated the coastal plains from eastern Texas to the southern tip of Virginia. Rivaled only by the Amazon rainforest, the longleaf ecosystem displays more biodiversity than any other ecosystem on Earth.

The longleaf trees above are spaced far enough apart to allow sunlight to stream down to the forest floor, creating optimal growing conditions for hundreds of plants such as the flowering purple lupine and carnivorous pitcher plant.

Historically, longleaf pines were an important economic resource, providing quality lumber for building and raw material for the naval stores industry. Longleaf helped reconstruct the South after the Civil War and, by the turn of the 21st century, were reduced to roughly three percent of the original acreage. Subsequent national fire suppression policies and practices were a major contributor to the continuing decline; prescribed fire is one of the most important management tools to restore this ecosystem to its former glory.

That decline has been halted and reversed due to the longleaf restoration activities of dozens of partner organizations. Efforts are underway to reclaim the South’s longleaf legacy and renew appreciation for this dynamic ecosystem. While some of the best remaining longleaf stands are on public lands actively managed using prescribed fire, such as National Forests and military bases, most land in the South is privately owned, making landowners – and public-private partnerships – the key to successful, long-term restoration.

The expansive longleaf pine ecosystem restoration effort is a national model of landscape-scale conservation, helping to shape how conservation is done in the future.

Longleaf pines now occupy more than five percent of their original range. Longleaf ecosystems contain a stunning diversity of plants - nearly 600 species, half of which are considered rare. Restoring this ecosystem is a top priority for government agencies, conservation groups and the public. Millions of people enjoy hunting, fishing, birding and hiking in longleaf forests.

Southern Company has invested in longleaf pine recovery through the National Fish and Wildlife Foundation (NFWF) since 2004. In 2012, four federal agencies – the U.S. Department of Defense, the U.S. Department of Agriculture’s Natural Resources Conservation Service and Forest Service, and the U.S. Department of Interior’s Fish and Wildlife Service – joined in to launch the Longleaf Stewardship Fund. The fund supports restoration of the longleaf pine ecosystem through implementation of the Range-Wide Conservation Plan for Longleaf Pine. This landmark program has since expanded to include nine public and private funders. Collectively, over 75 partner organizations across longleaf pine’s historic range have reversed the decline and today there are over 5.5 million acres and growing.

Learn More About These Program and Projects

The unique longleaf-grassland ecosystem is home to many rare animals, such as the red-cockaded woodpecker (RCW), gopher tortoise and indigo snake, as well as popular game species like turkey, Northern bobwhite quail and white-tailed deer. Wide open with easy viewing for long distances, a healthy longleaf-grassland ecosystem is dominated by grasses and flowering plants in the understory.

Learn More About Keystone Species of the Longleaf Pine Ecosystem